Key elements in the demoulding of soles 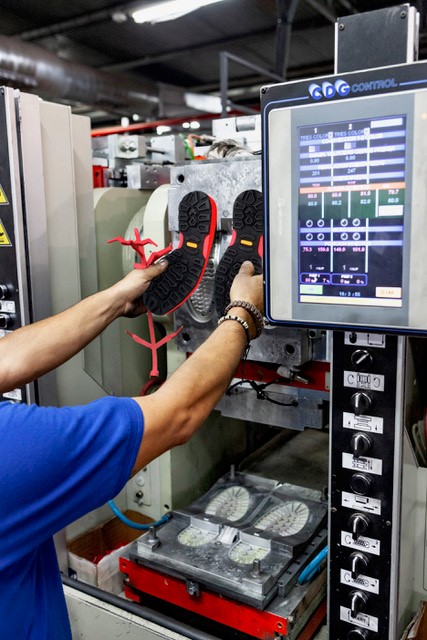 In the world of injecting soles, special emphasis is usually put on two essential elements:

Nevertheless, there are also other variables, while despite being less evident should not be less important, given that they guarantee the optimum quality of the final product. These are related to the injection material formula.

PLASTINHER URBAN works with two large material groups in the manufacturing of their soles: TPU, thermoplastic polyurethane, and TR, thermoplastic rubber. In their ample experience, they have an extensive knowledge of how to handle their raw materials to obtain optimum results, regarding both the final product and each step in the production line.

Therefore, the company are aware that certain TPU formulas prolong the crystallisation time of the material, which improves their demoulding capabilities, which in turn, facilitates the task for their workers.

As for TR, it contributes less adherence to the mould, which results in more elasticity. Not only does this facilitate the demoulding task for the worker, but also minimises the breakage of grasping points while being removed from the mould. This additive also allows them to work at lower temperatures. However, there are also some downsides to be considered. These formulas require a longer setting time, which can alter the dimensions of the product once removed from its mould. The solution is to take into account these changes when designing the mould itself. This closes the interdependence circuit of all the elements involved in the production process.